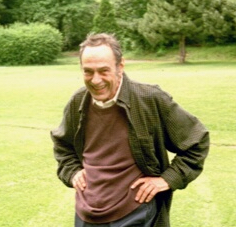 Eugene T. Gendlin, the American philosopher and psychologist who developed the mind-body connection practice called “Focusing,” died on May 1 at the age of 90 in Spring Valley, New York. His death was announced by the International Focusing Institute (www.focusing.org), which was founded in 1985 by Dr. Gendlin to promote the practice of Focusing and the philosophy behind it, which he called the “Philosophy of the Implicit.”  Focusing is an experiential, body-oriented method for generating insights and emotional healing.  Ancient Greek philosophers such as Aristotle were significant inspirational sources of Gendlin’s philosophy, as well as modern thinkers such as Wilhelm Dilthey, Edmund Husserl, John Dewey, William James, Ludwig Wittgenstein, Jean-Paul Sartre and Maurice Merleau-Ponty. All of us at LFI will miss Gene’s presence and inspiration. Please see this page for a full account of Gendlin’s life and work:

A brief attunement for grounding and centring

Certify as a Focusing Oriented Therapist, Counsellor, Coach or Psychologist